Military veterans are the stars in RWC November show 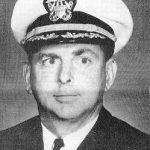 In typical Silent Generation fashion, the men and women at Rappahannock Westminster-Canterbury who served in the U.S. Armed Forces are very humble and low key. They don’t talk about serving in the military without being asked first. However, walk through RWC’s Gallery Hall during November and you will see increased foot traffic among veterans and their family and friends who are proud of their service.

Nearly 60 military veterans live at Rappahannock Westminster-Canterbury and their photos and stories will be on display as part of an annual Veterans Wall of Honor exhibit, held each November. Collectively, these vets have given nearly 500 years of service to their country.

RWC residents who served in World War II, Korea, Vietnam and/or the Cold War will be featured. Each display includes a photo of the resident in uniform, when available, along with a current photo and short biography including branch of service, years served, special engagements and commendations.

“The new residents who are veterans mostly served in Korea or Vietnam,” said Maria Ferrand, coordinator of Resident Life Services. “However, we still have 16 vets who served in World War II! Our youngest World War II vet is 90 and the oldest is 98.”

Navy Capt. (Ret.) Larry Treadwell, 91, just missed World War II, enlisting in 1945. He got an appointment to the Naval Academy and graduated in 1951. He married Ellen, who he says was a “Norfolk girl,” a week after graduation. They settled in Mathews County and were married for 40 years before her unexpected death.

Capt. Treadwell served on the Battleship Missouri in the Korean War, as well as on several destroyers, commanded a gasoline tanker in the Mediterranean as a lieutenant for two years, and was commander of a repair ship in Vietnam. He later spent 10 years at the Pentagon and retired in 1980 with 30 years of service. After his first wife’s death, he married Elsie Ernst from Mathews. They moved to RWC in 2003 and were married for 19 years until her death.

Curating the exhibition every year is a labor of love for Ferrand.

The exhibition opens Nov. 1, and residents and community members are invited to view the Veterans Wall of Honor 9 a.m. – 5 p.m. daily throughout November in Rappahannock Westminster-Canterbury’s Gallery Hall.

In addition to being featured in the exhibit, RWC’s veterans will be honored at a lunch on Nov. 11 – Veterans Day. “We moved from holding a breakfast to a lunch,” Ferrand said. “These military vets let us know that they have done their time with morning reveille and don’t want to get up at zero dark 30 for breakfast anymore!”

Ferrand’s father served in the U.S. Army for 25 years, and she curates this annual exhibition in his memory. Her son graduated from Army basic training last year and now works in military intelligence on the East Coast.