With a life-long interest in doodling, drawing and painting women’s faces, Deltaville artist JLyn Henderson recently retired as an interior designer to direct her full-time attention to painting.

Originally from California, Henderson worked as an award-winning residential and commercial interior designer in Williamsburg before moving to Deltaville where her daughter and son-in-law have a vacation home.

Her sources of inspiration today are as diverse as her artwork. Henderson painted as a form of self-expression throughout her childhood. She has a love of painting women’s faces in particular.

“The women I paint have these attitudes,” she said. “You can see from the expression on their faces things women are thinking, but don’t say.” 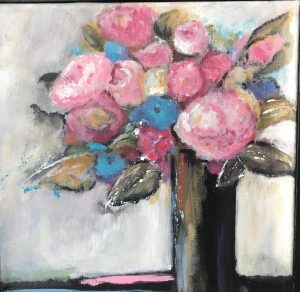 Henderson is a self-taught artist, but she had the opportunity while living in California to attend several art retreats under the direction of Edward and Maxine Runci, famous portrait artists.

“This is an experience I treasure to this day,” she said. “Ed Runci is best known for his pin up girls, which he would be mortified to know is how he’s best remembered. They were master artists at their very best, but the pin ups paid the bills.”

Henderson described some of her newer work as “women who are too tall for the garden.”

Henderson paints for herself and never thinks about how she might sell a piece. She works in her favorite colors and makes sure she loves it, so if it comes back home with her after an exhibition, she’s happy to have it in her house.”

“I feel very blessed that my work sells,” she said. “My inspiration comes from inside my head. The women in my paintings have wild hair and always hair over one eye.”

Her bold, whimsical paintings will be on display 9 a.m.-5 p.m. daily throughout January in Rappahannock Westminster-Canterbury’s Gallery Hall.