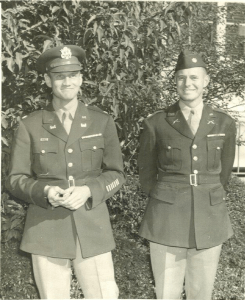 Marshall Orr was born a year after World War II began, and though he had a father and uncle who served in Europe, he didn’t know what they did there. He later found out about their fascinating roles and invites RWC residents and the local community to find out the “rest of the story” at his Viewpoints talk at Rappahannock Westminster-Canterbury on March 2.

“Everybody kept their wartime work a secret because they were sworn to keep what they did under wraps, but many people wrote it all down,” he said. “Twenty years after the Japanese surrendered, Ronald Lewin wrote the book, ‘Ultra Goes To War The First Account of World War II’s Greatest Secret Based on Official Documents.’

“My father, Sam Orr, was an engineer,” Orr said. “So, I gave him the book and said, ‘You’re going to enjoy this.’ Next time I saw him, he said, ‘I took the liberty of making a few comments.’ He had written 80 notations in the book about events that he witnessed with [U.S. General George] Patton, [Gen. Dwight] Eisenhower and [French President Charles] de Gaulle.”

Orr’s father was on the team involved in further developments in the secret history of the Enigma code machine, which was the single most important intelligence advantage the Allies had over the Axis. Ultra was the British code word for messages relating to Enigma and meant “ultra-top secret.”

“He was very involved in code breaking,” Orr said. “He was on a team that intercepted telecommunications coming over these machines. He reported on where the Germans were directly to (General) Omar Bradley who led the 12th U.S. Army all the way to Paris and the Rhine River.”

His father went to Clemson and was Valedictorian, which led to an appointment as White House aide to President Franklin D. Roosevelt.

Orr’s Uncle Bill went to West Point and was shipped out to the Philippines. After Pearl Harbor, the Japanese started bombing all of the islands and his uncle was captured on the Bataan peninsula. There, he was forced to walk the 60+ mile notoriously brutal Bataan Death March. He was a P.O.W. for three and a half years.

“At my Viewpoints talk at RWC, I’ll be telling the story of two brothers who did their duty, their reconciliation and what happened after that,” Orr said.

The Viewpoints series features experts on a wide range of topics of current interest. These free presentations begin at 11 a.m. and are held the first Monday of every month March through June in the Chesapeake Center Auditorium on RWC’s campus, 132 Lancaster Dr., Irvington.

Starting on Feb. 17, call RWC at 438-4000 for a reservation for the March 2 event. Attendees are invited to remain after the presentation for a complimentary lunch. Reservations open for each speaker two weeks prior to the event. RWC maintains a waiting list and honors reservations in the order received. Separate reservations must be made for each speaking event in the Viewpoints series.