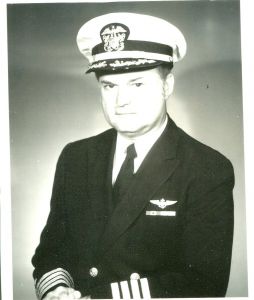 Many things have changed in 2020 due to the pandemic, but one thing remains the same – Rappahannock Westminster-Canterbury’s annual November tribute to its military veterans.

Nearly 60 RWC residents served in the military, and their photos and stories will be on display as part of an annual Veterans Wall of Honor exhibit, held each November in RWC’s Gallery Hall. Collectively, these vets have given nearly 400 years of service to their country.

One of the residents featured is Navy Capt. (Ret.) John Jennings. While he never saw combat, Jennings definitely had more than a few harrowing days on duty. After attending flight school in Pensacola and training in the area, he got lost on his first solo flight and had to land at Eglin Air Force Base in western Florida.

“I later had an accident landing on an aircraft carrier and the wheel broke off on the [Grumman] S2F Tracker I was flying,” Jennings said. “They said it wasn’t entirely my fault because they were flying us too slow. They stepped it up a couple of knots after that.”

After flying planes in the Navy for 17 years, Jennings loved it so much that he bought a Cessna with a partner and the adventures continued.

“I was flying around the Chesapeake Bay and didn’t realize I entered an Air Defense Identification Zone. I ended up getting a helicopter escort to the nearest field in Maryland where the state police keep their fleet. My license was suspended for 30 days.”

The RWC veterans have served in World War II, Korea, Vietnam and/or the Cold War. Each display includes a photo of the resident in uniform (when available), a current photo, and a short biography including branch of service, years served, special engagements and commendations. 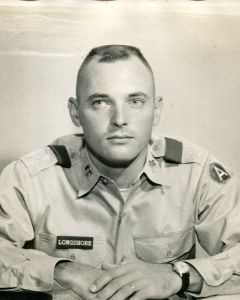 Army Lt. Col. (Ret.) Robert Longshore is another resident whose photo and bio are on display this month. He graduated from the ROTC at Georgia Tech in 1956, joined the Army and had a 20-year career.

“I wandered all over the place, married, had one child, traveled a lot and then picked up another couple of kids along the way,” Longshore said.

Indeed. He saw tours of duty in Georgia, three years in Germany, back to Georgia, then Vietnam as the war there heated up in 1963. He came back and the Army sent him to graduate school at Georgia Tech where he earned a degree in industrial engineering.

“I then went to Monterey, California, back to Vietnam, then Hawaii,” he said. “I spent the last part of my career at the Pentagon for two or three years. My family learned how to surf in Hawaii and how to catch fish off the sand beach in Monterey. I can’t brag about Vietnam though. That country taught me what war’s about.”

In addition to the exhibition in the Gallery Hall, a special video will play on Channel 85 (close circuit television at RWC) at 11 a.m. Nov. 11 to commemorate Armistice Day and the RWC veterans. The video will also be available for viewing on RWC’s YouTube Channel.

“This year, we are also placing signs in our service members’ yards that say, ‘A Proud Veteran Lives Here,’ along with a U.S. flag,” said Maria Ferrand, coordinator of Resident Life Services, who has curated the exhibition as a labor of love for years at RWC.