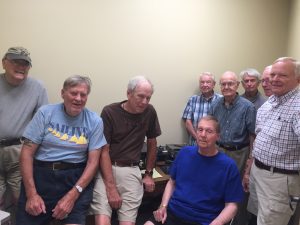 In 2017, a new resident, Mr. Jeff Walker, brought his lifelong hobby of amateur radio to RWC. He asked if there would be interest in forming an amateur radio club for residents and community members. From that conversation the path to the Rappahannock Westminster-Canterbury Amateur Radio Club was set. An     exploratory meeting of those interested was held October 10, 2017, and it was agreed that there was sufficient interest to ask the Federal Communications Commission (FCC) for recognition and licensure as an amateur radio club. On October 24, 2017, the RWC Amateur Radio Club was officially licensed by the FCC. Subsequently the Club applied for a special call sign, N4RWC, which was granted. The Club, which includes resident and community members, meets monthly. Largely through donations of equipment and funds, the Club has obtained radio equipment and antennas to outfit a functional “radio shack” in the Life   Enrichment Center. There is good reason to believe we have the first amateur radio club based in a community such as ours in Virginia. A presentation at the ROMEOs/OWLETs breakfast on August 2nd, displays, and an Open House on August 13th will highlight the world of amateur radio at RWC and beyond during August.

Enjoy each day in August and all RWC has to offer!