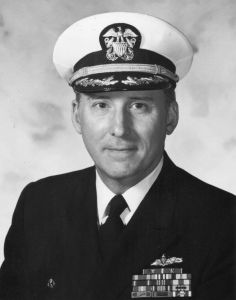 As former military members move in at Rappahannock Westminster-Canterbury, they quickly find they are in good company – 62 RWC residents served in the armed forces.

In its annual November tribute to military members, RWC will display their photos and stories as part of a Veterans Wall of Honor exhibit in RWC’s Gallery Hall. Collectively, these vets have given 648 years of service to their country.

One of the residents featured is U.S. Navy Capt. (Ret.) Norman Mosher who as a lieutenant was awarded the Bronze Star with Combat “V” for action against the enemy while commanding a ship later in the conflict. He was also recognized for exceptionally meritorious conduct for his work in 22 combat patrols, three major operations and three minor operations in Vietnam.

“The draft was in effect when I graduated from college, and it was very real,” Mosher said. “You had to do your duty one way or the other, and I didn’t see myself in trenches. I went into the Navy not intending to spend more than the minimal amount of time. After 26 years and three sea commands, I retired.”

Frances Bacon and Robert Holley, a married couple at RWC, served in the U.S. Army also during the Vietnam War years. Bacon received a direct commission as a second lieutenant right out of college in 1970. She served on active duty for four years, in the reserves for one year and was finally reassigned to the Ready Reserves. Her service time allowed her to use the G.I. Bill for graduate school. She taught for 30+ years in Fairfax County and Prince William County Public Schools. Holley was in the 11th Airborne Division in Munich, Germany from 1957 to 1960. During that time, the Vietnam War was underway, but the U.S. had not yet entered the fighting.

“It was a peaceful time,” Holley said. “Mine was a lucky generation – too young to serve in the Korean War and in and out before the Vietnam War heated up.”

The couple met years later in Northern Virginia. Holley was teaching Earth science in Prince William County and Bacon taught special education. They’ve been married 30 years and moved into RWC about a year ago.

As a Specialist 4th class, Holley oversaw a unit that built atomic warheads. “It was a kit,” Holley recalled. “These were highly explosive nuclear warheads, but we never even tested one of them. We just assembled them.”

As serving in the military during wartime goes, Mosher seems to have been in the right place at the right time as well. He volunteered to go to Vietnam in 1963 and was sent as an advisor before American combat troops came into the country.

“I was part of a rather loose advisory organization and wandered around the country living on the economy, largely independent,” he says. “Parts of it were delightful, and parts were terrifying. Our headquarters town was Vũng Tàu, which was a delightful beach resort frequented by French planters. I later was told the Viet Cong (VC) officers bought me drinks. You wouldn’t know because we were all in civilian clothes. We never had a VC incident because their officers enjoyed Vũng Tàu as much as we did.”

RWC veterans on the Gallery Wall have served in World War II, Korea, Vietnam and/or the Cold War. Each display includes a photo of the resident in uniform (when available), a current photo, and a short biography, including branch of service, years served, special engagements and commendations.

In addition to the exhibition in the Gallery Hall, a special video will play on Channel 85 (close circuit television at RWC) at 11 a.m., Nov. 11, to commemorate Armistice Day and the RWC veterans. The video will also be available for viewing on RWC’s YouTube Channel.

“We are also placing signs in our service members’ yards that say, ‘A Proud Veteran Lives Here,’ along with a U.S. flag,” said Maria Ferrand, coordinator of Resident Life Services. Ferrand has curated the exhibition as a labor of love for years at RWC.